Angenica and Daniel are high school sweethearts who live in California. To celebrate their 10-year anniversary, they visited Chicago (Angenica’s favorite city), where Danny proposed on a snowy winter day at the Lincoln Park Nature Boardwalk! Photography by Hanna Walkowaik.

We were together for 10 years before getting engaged, so we had already talked a lot about getting married in the years leading up to the proposal. Even when we felt like we were finally ready to get married, we still talked about how we imagined the proposal happening. I originally planned to surprise her with the proposal, but neither of us cared about whether or not it ended up being a surprise. We basically ended up planning it all out together, which was great because it took a lot of stress off of me and we had a lot of fun talking about it.

Angenica had visited Chicago a couple times and it became her favorite city, so I thought that it would be perfect to take her back to celebrate our 10-year anniversary and ask her to marry me. We knew we wanted pictures to remember the moment forever, we reached out to Hanna Walkowaik set it up. Being from California, we were excited to see the fall colors in Chicago, so our plan was to pick a location where you could see the skyline, the water, and the beautiful trees. Hanna was so helpful suggesting the perfect locations for me to propose, and she even went above and beyond to set up some candles and flowers for me before we got there (just one small surprise I could have for Angenica since we planned the trip together and she knew the proposal was happening).

Once we got to Chicago, we had our eyes on the weather every day leading up to our anniversary, the day I planned to propose. At first, it looked like a small chance of rain, but as we got closer, that chance increased. We had to come up with a backup location and had to decide on different outfits to keep us warm in case it did rain. Finally, the day came, and we woke up to a snow flurry. We started that morning with an amazing breakfast, but I couldn’t even eat because I was so nervous. I thought that it either needed to clear up completely, or snow even harder so that it would stick to the ground. My wish came true and by the time we were heading to Lincoln Park for the proposal, the city turned into a full-on winter wonderland.

In our Uber ride there, we looked at each other and couldn’t help but giggle because we knew what was about to happen, but our driver had no idea. Part of me wanted Angenica to be surprised by my proposal, but at that moment in the car, I was so happy that we shared that experience of the anticipation leading up to the big moment. When we arrived at Lincoln Park, Hanna’s assistant, Sarah, met us with an umbrella and told us to take our time. We walked to the honeycomb hand-in-hand with our hearts racing. Under the honeycomb, I loved seeing Angenica’s reaction to the beautifully arranged flowers and candles that Hanna and Sarah set up. We walked over to them, looked each other in the eyes, I had to take a deep breath, and then I could finally ask Angenica to marry me… and she said YES!

We met in high school Spanish class, in 2008. We didn’t talk much in class, but since our high school was small, one night both our groups of friends went to see the same movie. We talked all summer and danced a lot at our welcome dance the following year. At the welcome dance, he asked me on a date to the movies, and at the movies he asked me to our homecoming dance, which so happened to be on Halloween. We coordinated our costumes; we were sailors. On the dance floor, Danny whispered in my ear asking if I would go out with him. October 31, 2009 became our anniversary. We had less than a year being together in high school, and then he moved to Santa Barbara for college, but we decided to stay together even though it would be tough. The “long distance” (about 3 hours of a drive) was a test on our relationship, but we developed a strong communication and patience for each other. We have been together for every milestone in our lives; we really did grow up together, and on our 11-year anniversary October 31, 2020, I get to marry my best friend.

We went ring shopping together and the experience at Brilliant Earth was educational and stress free. Surprisingly, she chose a ring in that one session. The band that she picked is white gold and is a very simple style with an oval diamond and a round diamond along the band on each side of the center stone. The center stone is a cushion cut, just over 2 carats with a prong setting to add a delicate touch. The simple, petite band and the prong setting really give all the attention to the center stone. 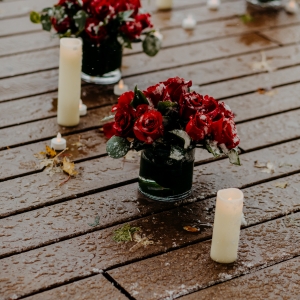 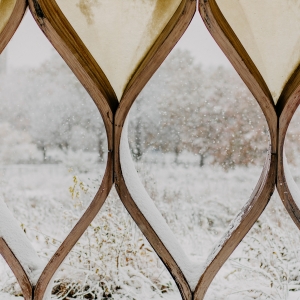 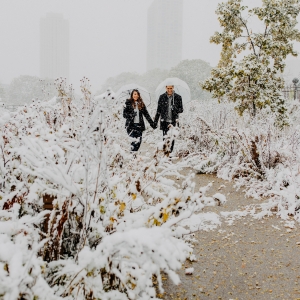 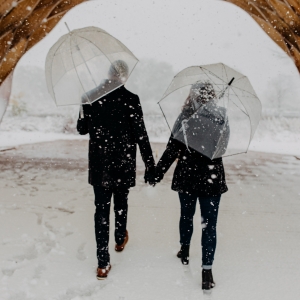 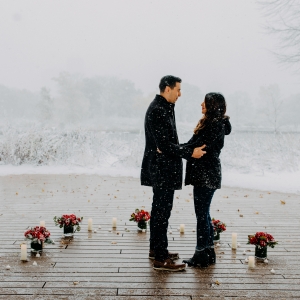 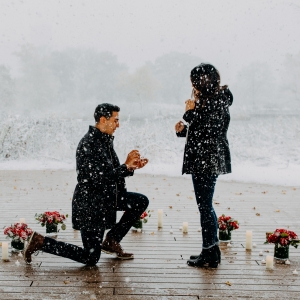 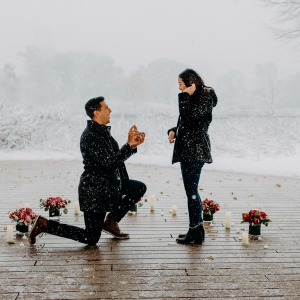 A toast to the weekend and to the festive season t

Dennis and Cindy envisioned their wedding to be ou

This shoot is a Renaissance vision come to life! A

I’m smiling from ear to ear. We’re CRUSHING on

Three words come to mind when we see this stunning

{New Blog Post!} The look of sheer surprise on Sim

Brandon and Curtis will be saying “I do” in 20